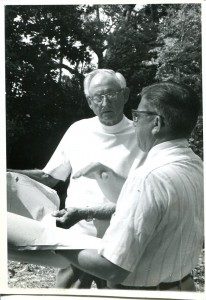 William Millard Shoemaker left a legacy of personal achievements and contributions to higher education in the state of Mississippi. Fittingly, relatives of the late University of Mississippi alumnus have donated mementos of his storied life to the J.D. Williams Library at his alma mater.

William M. Shoemaker Jr., the deceased’s only surviving child, and Robert “Bob” Hume, Shoemaker’s son-in-law, made the donation possible. Several scrapbooks, including one highlighting his tenure on the Mississippi Institutions of Higher Learning board, are among the items in the collection. Hume plans to fund the installment of the documents into the archives.

“There are letters from notable Mississippians in education and politics, including former president of [University of Southern Mississippi] Aubrey Lucas, former Delta State president Kent Wyatt, former UM Chancellor Porter Fortune, Congressman Sonny Montgomery and several others,” said Jennifer Ford, head of archives and special collections and assistant professor at UM. “A manuscript written by his daughter entitled, ‘William Millard Shoemaker, As I Remember Him,’ is also a highlight of the collection.”

Hume married Shoemaker’s daughter, Susan, in 1981. It was his late wife’s wish for the tribute to her father to find a permanent home at the family’s beloved alma mater, he said.

“Considering the amount of work my wife and mother-in-law put into the creation of the manuscript, this was the most appropriate and logical thing to do,” Hume said. “She would have wanted it this way.”

Shoemaker’s son recalled fond memories of his father’s service on the IHL board.

“My father’s time on the board was a time of student unrest,” Shoemaker Jr. said. “To students, the board was an unknown entity and viewed with suspicion. He proposed and put through a proposal allowing student observers to sit in certain board sessions. This was a creative approach to a problem, and I don’t think the board would have done this without his leadership.”

Though Hume only knew his father-in-law three years before his death in 1984, he described Shoemaker as a remarkable human being.

“He was just an instantly likable person who was brilliant at making people feel comfortable around him,” Hume said. “Perhaps because he began his career as a salesman, my father-in-law had the ability to remember people’s names long after he had met them.”

Despite Shoemaker’s easygoing manner, Hume said he was nobody’s pushover.

“As an IHL board member, he worked tirelessly and could be very convincing when he wanted to persuade people to follow what he felt was the best course of action,” he added.

“I think it was Daddy’s fairness and integrity that made all the heads of the various colleges, universities and other board members respect him so much,” he said. “His business background coupled with [his] very clear admiration for learning made him one of the better leaders the board had experienced.”

Born in Lake Cormorant, the late educator and administrator enrolled at UM in 1931 as a Felix LaBauve scholar from Nesbit. He received his Bachelor of Science degree in commerce in 1935.

“As a student, Mr. Shoemaker served on the YMCA cabinet, was a member of the Cardinal Club, pledged Pi Kappa Alpha Fraternity and was a recognized campus leader,” Ford said. “He and his wife, the late Alice Vivian Denman, had three children: William Jr., the late Susan S. Hume and the late Richard D. Shoemaker. All attended the university.”

Shoemaker served as executive vice president and general manager of the Meridian & Bigbee Railroad. He was later appointed to the board of trustees of Mississippi’s Institutions of Higher Learning by Gov. John Bell Williams and served until 1980.

Shoemaker Hall, which houses the UM Department of Biology, was named in his honor in 1984. The entire Shoemaker family was surprised and honored by the gesture.

“I gave his acceptance speech because multiple small strokes had slowed his speech too much for him to speak in public,” Shoemaker Jr. said. “The University of Southern Mississippi named a teaching auditorium for him, and the Gulf Coast Research Center named a research laboratory for him. My wife, Sally, and I flew from California for each of these events, and I can’t think of attending any other events that showed so much respect and love.”

After Shoemaker’s death, his widow established a scholarship for biology students in his memory. Their children later contributed to the fund, which provided funding for five students last year.

“The collection certainly provides detailed insight into his life, personality and work ethic,” Ford said. “Special Collections is greatly indebted to the Shoemaker family for the generous gift of the archive of this significant Mississippian.”