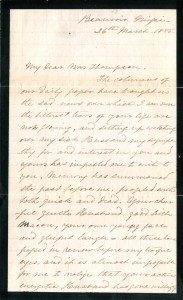 Carolyn Jones Ross’s devotion to research was matched perfectly to her commitment to the University of Mississippi Libraries. Her combined loves yielded two gifts to UM’s Archives and Special Collections this year.

The Carolyn Jones Ross Memorial Collection began last March with an initial gift of primary documents from Jacob Thompson and his family. Included are nine letters signed by Thompson, 17 letters from his wife, Catherine, ledgers containing information on slaves and financial papers written between 1842-1885.

A second gift in September, the Carolyn Jones Ross Research Files, is a collection of the research files of Ross pertaining primarily to her own work on Thompson. Ross, who died last March, served three years on the Oxford-Lafayette Heritage Foundation board, during which her ongoing research into Thompson’s life was used to develop the marker at the Thompson Home Place site and the interpretive materials at the L.O.C. Lamar House.

“During President Buchanan’s administration, Thompson was Secretary of the Interior until 1861 when the Civil War erupted,” said Julia Rholes, UM dean of libraries. “During the war he served in both military and legislative capacities for the Confederacy.”

Joyce Sidorfsky of Oxford was a longtime family friend of Ross. The two met as band students at Louisiana State University years ago and became inseparable.

“She was in the band because her father was the director,” Sidorfsky said. “I was the band librarian. That’s how we got to know each other on a daily basis.”

Ross and Sidorfsky traveled the United States and Europe together. She remembers her late friend as both a serious collector and a kind, benevolent human being who loved the performing arts.

“She collected everything,” Sidorfsky said. “She was particularly fond of giraffes. She has well over 300 of them in her house.”

“At the same time, Carolyn was always sticking her neck out for others. She was pleasant to be around and a great traveling companion.”

Ross was a retired speech-language pathologist whose career included stints in Iberville Parish, Louisiana public schools and LSU Medical School prior to nearly a quarter century in private practice in New Orleans. She earned bachelor’s and master’s degrees from LSU-Baton Rouge and a Ph.D. from Northwestern University in Evanston, Illinois. She was an early pioneer in the use of Cued Speech, a phoneme-based system of hand shapes and positions that clarifies ongoing speech.

Ross served three years on the Yoknapatawpha Arts Council board.